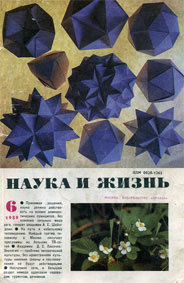 The article in “Science and Life” tells about an interesting way of making polyhedra.

Mathematicians have already proved the possibility of making 3D objects from a ribbon. You can see how to make a tetrahedron in Figure 1. The ribbon is folded according to the drawn lines, sides of equilateral triangles.

First, let us identify these five geometric objects — or, in the terminology of mathematicians, geometric solids. One can make a cube using a similar way (see Fig. 2). Its faces are lined up in a chain, and to change the direction of the ribbon to complete the formation, it is enough to fold it on the diagonal of the square (the article about a cube made of ribbon was published in “Science and Life”, №10, 1972)

A simple ribbon can be transformed into a blank for making various polyhedra when a pattern is drawn on its surface. Based on a variety of patterns, one can make all regular polyhedra except dodecahedron. This is due to the lack of symmetry axes of the 5th, 7th, and higher-order in flat patterns. In other words, it is impossible to make a continuous pattern made of pentagons.

Patterns of our ribbons are a special case of symmetry networks Shubnikov - Laves (see Fig. 5). Triangular cells are formed by applying two pairs of hexagonal mirror lattice turned to each other by 90 °, and the square ones are formed by the combination of square lattices at 45 ° to each other. From this perspective, the formation of polyhedra turns to become a theoretically sound and natural phenomenon.

Truly indeed that when a ring of the future polyhedron is folded, a transfer of one unit cell is made to a certain step; to put it differently, we see translational symmetry in action. If we change the direction of forming by folding the ribbon in the opposite direction and mentally a rotation of the cell around the lattice site, we will see another type of symmetry, the rotational one. Therefore, a blank of the ribbon provides us with a rotational-translational symmetry. In our models, this type of symmetry works with the following rotational angles: 30°, 45°, 60°, 90°, 120°, 150°, 180°. This is the secret of making 3D shapes of a flat ribbon.

Thus, it is clear that there can be only two types of ribbons with angles multiple of 30 ° and 45 °. Four regular polyhedra (cube, octahedron, tetrahedron and icosahedron) are made of them, as well as a whole family of homogenous polyhedra (see cover photo).

In a wonderful essay, "On hexagonal flakes" written by Johannes Kepler, there is a very accurate observation: "Among the regular solids, the cube is considered to be the first one, primordial figure, the father of all the other solids. Octahedron, which has the same number of vertices as the cube has faced, is like his wife ... ".

Indeed, all the elements of complex shapes formed from our ribbon are the elements of a cube or octahedron, or both together. To make simple polyhedra is not that difficult. But to make complex stellated shapes, one will need special tools to hold rings together until they are glued together, like staples, clips, etc.

Creating unique shapes of polyhedra is an entertaining process. The ribbon has front and reverse sides, which are alternately or simultaneously involved in constructing solids' faces; every fold allows making shapes in two directions. At this point, it is easy to imagine a whole family of puzzle games based on the ribbon. For example, to fold a pattern or ornament, which fragments are scattered on the ribbon, in the given order.

The method of making polyhedra of ribbon exists not only for entertainment. The method of creating 3D shapes by winding is waiting for its creator. Perhaps shortly, unique packaging, interior details, and - who knows! - a cover of spacecraft made from ordinary ribbon will become a part of our everyday life.