This is a new, very unusual way to create a star octahedron model. The polyhedron itself was discovered in 1619 by the German mathematician and astronomer Johann Kepler.

In one of our previous articles we told you about a challenging task to make a polyhedron having just six identical figures. In November, 1984, there was published an article in the magazine called "Quantum” which described how to make a stellated octahedron with the similar principles.

The author of the article, Igor Glushkov (from Obninsk, Russia) offers the following idea. The stellated octahedron (the other name: Kepler’s “stella octangula”) can be cut into 4 equal parts and get a challenging task out of it. The main aim is to assemble these parts to get a polyhedron. Download net. 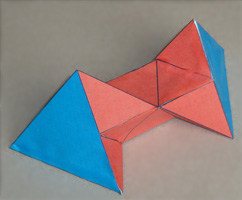 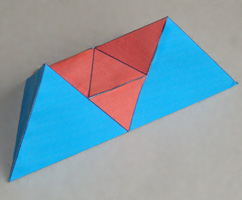 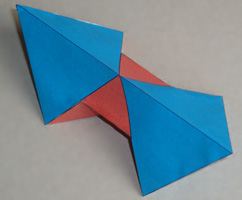 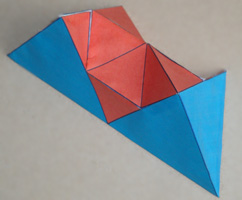 Each of the part can be made of a cardboard. To assemble a polyhedron you will need 4 printed sheets of that model. 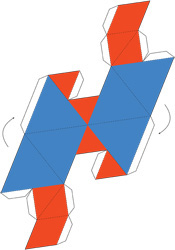 The fold lines are indicated by a dotted line.

The steps are as follows:

Pay. attention that red painted area should be inside the polyhedron, while the blue one is the outside 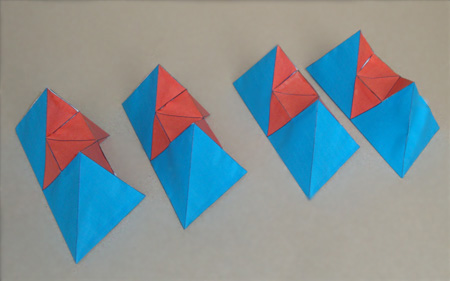 Attention that red painted area should be inside the polyhedron, while the blue one is the outside 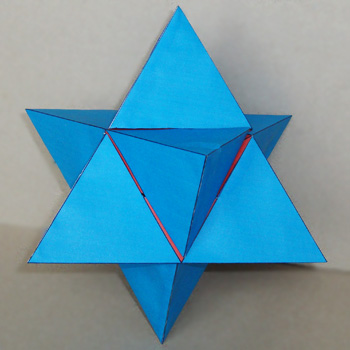 * - when using a model presented at www.polyhedr.com

The most famous building in Kazan (city in Russia) and its main symbol is Tower Syuyumbike. It is...

ARCHIMED (287 - 212 BC) - Ancient Greek mathematician, physicist and mechanic. Archimedes is the...

Polyhedron. What is it?

A polyhedron is a solid bounded by flat polygons,...

Can a polyhedron be curved? Perhaps this is some kind of mistake? Or maybe this is not a...

Suppose you first saw the edition “Magic Edges” on the counter of a bookstore or on Internet...