Stellated octahedron (or compound of two tetrahedra). How to make pdf template 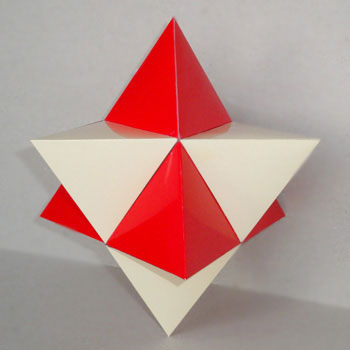 A red pyramid passed through a white pyramid or vice versa. Or maybe it is a complex of pyramids directed in different directions. These figures are always a mystery.

The presented image of this polyhedron illustrates exactly its second name - the compound of two tetrahedra. Here you can imagine a red tetrahedron pointing up through a beige tetrahedron that points down.

However, mathematicians prefer to call the polyhedron a stellated octahedron.

The stellated octahedron could be defined as a regular polyhedron since all its faces are regular triangles of the same size and all angles between them are equal.

But in fact, this geometric solid is not the sixth regular polyhedron on par with the five known Platonic solids. The reason is that the word convex is present in the definition of a regular polyhedron—that is, all faces must lie on one side of the plane passing through any of them.

History of its discovery

History of its discovery 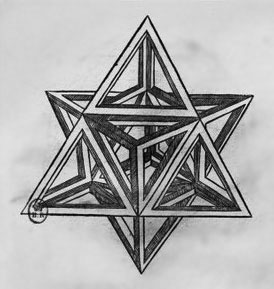 The star octahedron was first depicted in 1509 in a book De Divina proportione written by the mathematician Luca Pacioli (1445-1514) with illustrations from Leonardo da Vinci.
The stellated octahedron was made in the form of an interconnected eight-frame tetrahedron. Then, almost 100 years later, the polyhedron was rediscovered by Johann Kepler. The Stella octangula, the octagonal star, was named after him. It is this illustration of a stellate octahedron that adds controversy about how this polyhedron was discovered. 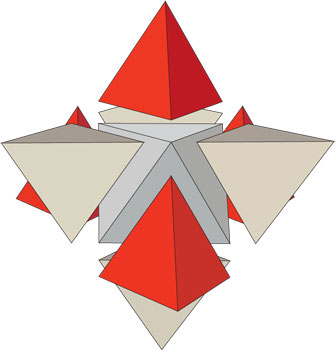 Video. The rotation of a polyhedron

Video. The rotation of a polyhedron

This video from our partners (the ART KOSEKOMA team) clearly demonstrates how you can transform an octahedron into a star form and get two tetrahedrons.

First, the faces of the octahedron make a star form when they are drawn out. Then the video clip shows how a stellated octahedron can be decomposed into two tetrahedrons. 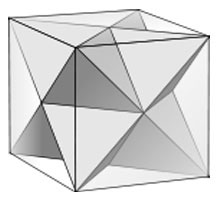 2. Here, we see an interesting feature of the polyhedron. If all the pointed tops are interconnected, the intersection lines correspond exactly to the cube's edges. Thus, the stellated octahedron can be inscribed in a cube. 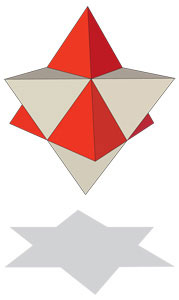 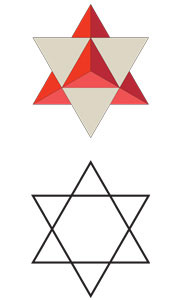 3. If you look at the polyhedron from above or at the shadow cast, the pattern outlines will create a regular hexagonal star.
The hexagonal star in two intersecting triangles is the oldest symbol, referred to as the Star of David (another name is the Seal of King Solomon).
Also, there are esoteric interpretations of the properties of a polyhedron.

The first of the proposed assembly options is to glue a stellated octahedron from a single net. This option is most often found in educational literature. However, the limitation is the size of the sheet. If this is an A4 sheet, then the dimensions of the finished polyhedron are very modest. Download pattern
Pattern 2

The second option is to make it from separate octahedron and 8 blanks in the form of pyramids. Then, all blanks are alternately glued to the sides of the octahedron. This option is preferable for beginner modelers.

On the Internet, we found a very unusual version of the assembly, also in the form of a single net. Download pattern
Stellated octahedron from the set "Magic Edges"

To assemble a polyhedron, we provide you with ready-made nets that are pre-cut and folded.
To do this, you need to use the details of the kit from Magic Edges 15.
Also, in the release itself, you will find information about the structure of the polyhedron. 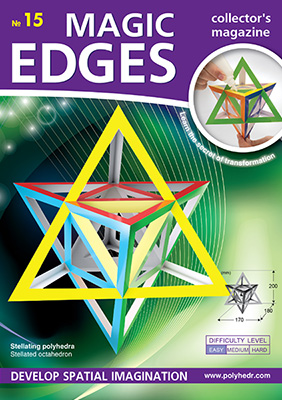 The rotation of the finished polyhedron. The polyhedron is assembled from the kit - "Magic edges 15".

This article will introduce you to the technology of manufacturing geometric metal solids used by...