Star of the Game of Thrones 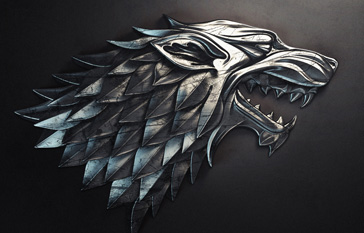 The popular television series "Game of Thrones" is interesting not only by the complex plot, the play of actors, and masterful immersion in the Middle Ages but also by the fact that it actively uses the magic symbols of numbers symbols.

One of these symbols is the "seven-pointed star." 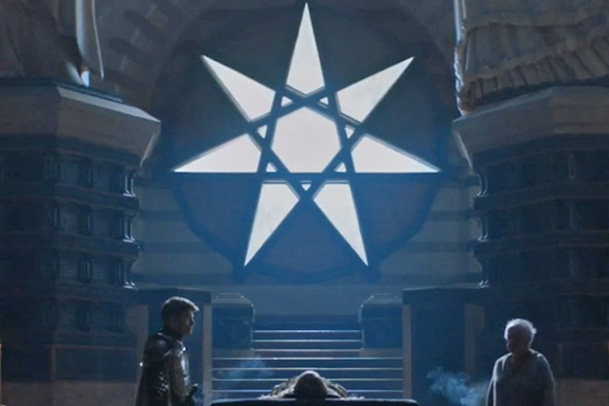 The Seven-Pointed Star is the main symbol of Westeros' official religion, representing a collection of religious texts and codes of faith in the Seven, faith in one god, who has seven faces, each of which represents some aspect of life.

• Father: personifies divine justice, judges the souls of people after death.
• Mother: personifies forgiveness, peace, fertility, childbearing. Sometimes it is called the power of women.
• Virgo: personifies purity, love, and beauty.
• Staritsa: personifies wisdom and foresight. She is usually depicted with a lantern in her hand.
• Warrior: personifies courage in battle.
• Blacksmith: personifies creation and professional craftsmanship.
• Unknown: personifies death and the unknown. He is rarely prayed.
The interior of the Great Septa of Baylor, located in Royal Harbor, is decorated with seven-pointed stars and sculptures that personify the seven different aspects of divine nature. In septa, major religious ceremonies are held. Leaving the world of cinema, we can assume that the series (book) creators did not accidentally use the symbolism of the seven-rayed star.

In our real world, the seven-rayed star is one of the oldest symbols of the East. In particular, such civilizations, Ancient Assyria, Shemera, Iberia (ancient Georgia). And besides, this star is also known under the name Star of Mages.
In ancient times, the seven-pointed star was a symbol of the rising sun.
Seven was used as a symbol of success and good luck at all levels. Many ancient beliefs are associated with the number seven, bringing good luck. The amulet in the form of a seven-pointed star was worn not only as a guard but also as helping development, spiritual growth. This symbol was worn by seekers of secret knowledge and used in many occult organizations.

The first variant of building a seven-pointed star is to extend the rays parallel to the sides of the regular heptagon.
First, we get the first-star shape of the heptagon.

Further extension of the rays leads to forming the second (final) form of the heptagon. 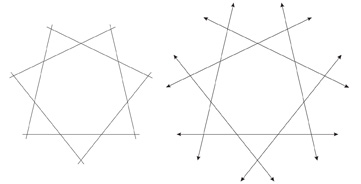 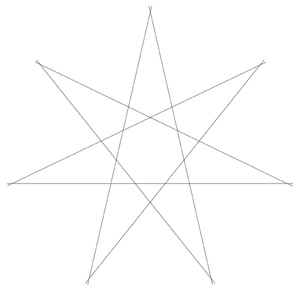 The second option is to connect the vertices of a regular heptagon consecutively.

A new star is added to the previously known pentagram and hexagram: 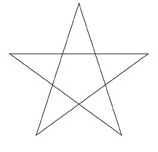 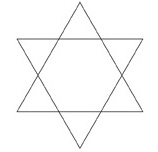 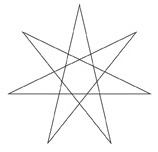 We offer you to glue a model of a heptagonal star.
First, you need to download the nets: 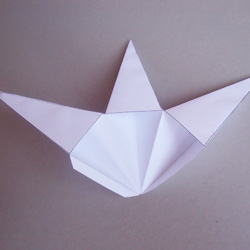 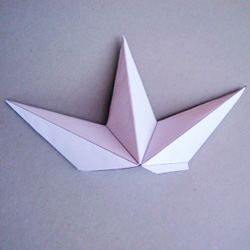 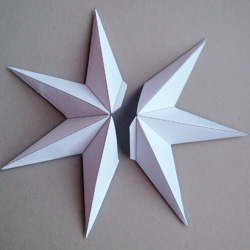 4. get a ready-made half of a star
We repeat the above actions for the second half of the star and glue them together to get the seven-pointed star model.