This article will tell whether the “Magic Edges” can be attributed to a variety of origami. As the same geometric shape can be obtained using parts from the "Magic edges" and using the origami technique. What are the pros and cons, and what are the differences?
The impression may appear that the paper models of polyhedra in their performance do not differ much from each other for the uninitiated look. Meanwhile, if we take for more careful comparison two common techniques from the arsenal of “paper creativity” - modeling and origami, then we will find a significant difference in the approaches, which make them fundamentally dissimilar.
So, modeling from paper and the set "Magic Edges" refers to its number. In its approach, it preliminarily "parses" the spatial figure into fragments-scanning. Transferred to paper nets cut, bend, and glue. The junction at one of the surfaces has an overlap - valve. The valve from the junction to the adjacent part is coated with glue. Consistently glued surfaces eventually form a solid structure. 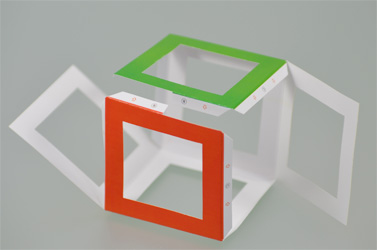 The technique of origami, in any case, in its classical version, does not imply that the paper is cut and joined with glue. Paper sheets, most often square in shape, are folded so that the friction in the folds keeps the figure assembled, preventing it from falling apart. 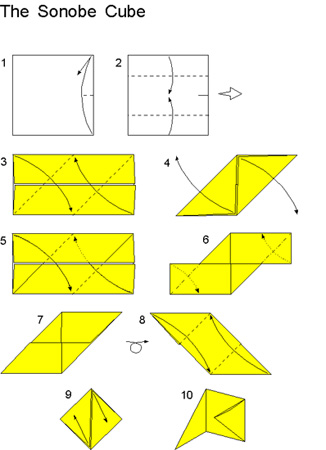 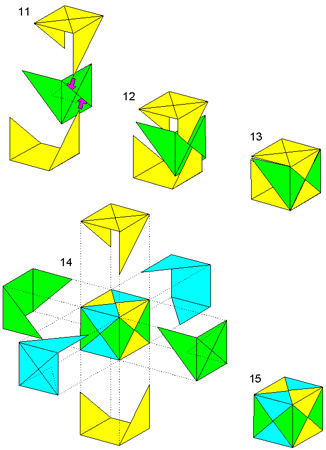 Its “modular” variety deserves special attention in origami, since it is best applied to the creation of polyhedra. In modular origami, several sheets of paper are used in the folding process. The number of such sheets can be huge and depends on the number of modules in the assembled figures design. A particular embodiment of the modular origami principle is the Sonobe module, a parallelogram folded from a square sheet with two pockets for connecting it with similar modules. The variety of spatial bodies created based on the Sonobe module is infinitely large. Still, they all consist of one element, leading to the surface's uniformity forming the figure. Each technique has its limitations, and one cannot say about the definite advantage.

However, as an obvious one, continuing the comparison of origami with the set “Magic Edges”, we can note that it is difficult to work with a thick paper due to multiple folds in origami. True, the origami technique does not require glue in work and, therefore, does not put us in front of the difficulty in choosing the latter. But on the other hand, origami implies an independent search for suitable paper and the choice of schemes, mastering the most complex and interesting of which will require considerable time and certain skills.

The set "Magic Edges" is made on glossy cardboard with high-quality color printing. The developmental parts' contours are partially cut and easily separated by simply pressing them with your fingers. All self-assembly materials are prefaced with illustrated instruction and a historical excursion mentioning curious information about discovering a particular polyhedron figure and the mathematicians involved in this discovery. Intelligently and clearly! 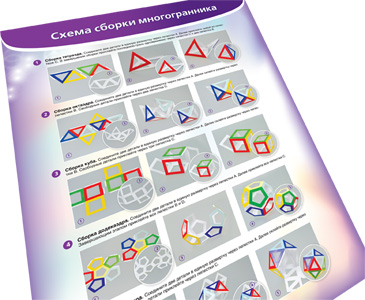 This suggests the conclusion that a greater cognitive effect can be extracted from the set of “Magic Edges”, which systematically supplies information. We are dealing with an excellent means of educating spatial thinking and simultaneously strengthening the child's relationship during your joint creative development of the proposed material!

The box geometric shape from a distance resembles a rounded shape, emphasizing the similarity with the...