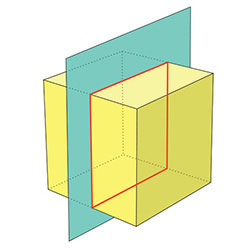 IIn issue 25 of the Magic Edges, we noticed that we get a cross-sectional cut at the cut point by cutting a cube with a plane.
And this geometric shape will change depending on the angle of inclination of the plane.

Taking three cubes, we successively cut them with a plane and got seven different sections:
- two regular triangles, differing in their size;
- square;
- rectangle;
- diamond;
- pentagon;
- regular hexagon. Here it can be seen on video.

As you probably guess, this is not all possible polygons obtained by cutting a cube. But if the classic cube cuts seemed boring to you, then here is the story told in 1693 by the English mathematician John Wallis.
Prince Rupert of Palatinate argued that in a cube, you could cut a hole large enough to drag a cube of the same size through it.

Prince Rupert of Palatinate (germ. Ruprecht) (1619–1682).
Rupert is one of the founders of the Hudson's Bay Company and its first manager. In 1646–1648, Rupert led British units as part of the French army. Also, he was a talented inventor and an excellent engraver who introduced the mezzotint technique in England.

So what do we have? In the presence of two identical cubes.

In one of the cubes, you need to make a through-hole.
To fit a cube into this hole, the size of the hole must be suitable.
Which one? Most likely, this should be the smallest hole area. In this case, the hole size will be square and equal to the area of ​​the cube side. In such a square hole, a cube can pass.
We decided on the shape of the hole - it is a square equal to the cube side. Now let's try to rotate the second cube to make a square hole inside the first (green) one. The complexity of the problem is that it is an internal opening, and the outer walls of the cut cube would be inseparable.

At first, it may seem that the hole obviously cannot be only internal and will go beyond the face of the cut cube.
But this assumption will work until you turn the green cube as follows: 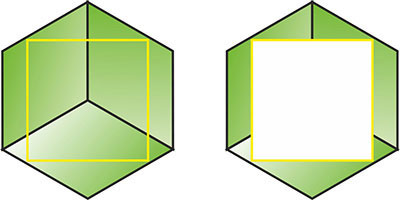 In this case, we can make such an opening inside the green cube that a yellow cube will go right through it. John Wallis proved it mathematically, and Prince Rupert won his argument.
Wallis suggested that such a hole would be parallel to the spatial diagonal of the cube.

The cube's projection on a plane perpendicular to this diagonal is a regular hexagon. The largest hole parallel to the diagonal can be obtained by drawing the largest square that can be inscribed in this hexagon. 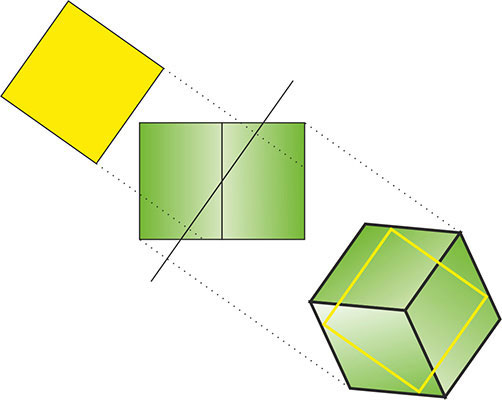 The cube model with a hole cut should look like this:

This is how a situation will look like when one cube passes through another:

After about 100 years, the Dutch mathematician Peter Newland figured out that a better solution could be found. The thing is that the physical model of Prince Rupert’s cube is complicated to manufacture since it has fragile walls at four points. The optimal solution proposed by Peter Newland can be obtained by cutting a hole at a different angle than the spatial diagonal. This allows you to increase the thickness of the walls in thin places.
P.S.

In the logo of the well-known program from Microsoft, you can see in something similar a picture, with a cube that has a middle cut out.
© polyhedr.com  13/03/2018

In the micro-world, polyhedra are found in molecules, viruses, and bacteria - the simplest...

Practical use of paper models

Quite often, a question about the practical use of paper models pops up. What is the point of...