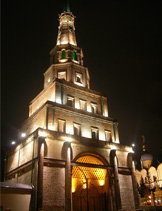 The most famous building in Kazan (a city in Russia) and its main symbol is Tower Syuyumbike. It is impossible to imagine Kazan without it, as one cannot imagine Paris without the Eiffel tower, London without the Tower, and Rome without the Colosseum. 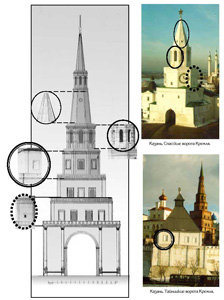 Syuyumbike tower in Kazan has seven levels; the bottom three tiers are tetrahedra reduced in height and width. They serve as a base for two octagons set on them. The tower's top consists of a faceted tent made of bricks in a truncated octagonal pyramid and a guardroom above it. On the very top, one can see a steeple with a gilded crescent set on the apple. The lower tier of the building has two pillars connected by a cylindrical arch over the passage.

The facades of tetrahedra and octahedral on each level are decorated in different ways. One can see belts with curbstones or simple overlap. Thin blades or rollers underline the facets of all the tiers. Small windows and medium-sized doorways have three-centered arches and have rectangular platbands. On the east and west facades, one can see pylons, which reflect the oriental theme and resemble stalactites. 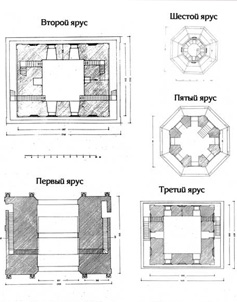 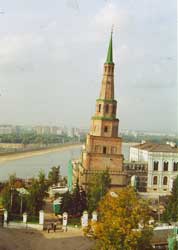 The main feature of the tower Syuyumbike in Kazan is that it is also one of the few leaning towers found globally. Its height is 58 meters, which is two meters above the Tower of Pisa. It began to lean to the east just right after the construction was finished because its western side, built on the old watchtower's foundations, proved to be more stable. By 1930, the deviation from the axis of its apex reached 128 centimeters. Some restoration work was conducted in the 1990s, which halted further tilt.

Syuyumbike tower in Kazan was built in the second half of the XVII century - the beginning of the XVIII century. It was intended as a watchtower at the entrance to the yard of the commandant house. The name of the tower is linked to the famous Tsar wife in Kazan, Syuyumbike. And its origin is covered with many myths and legends. 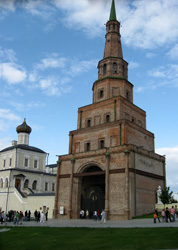 Legends of the Tower Syuyumbike 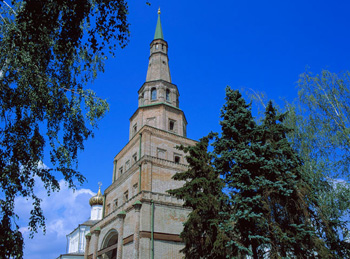 There are several legends, one way or another, connected with the tower Syuyumbike. All of them are related to a disputed history of the construction of this tower; however, it is considered that none of them is true.

The most popular and favorite legend among the tourists is telling that the tower was built at the request of Queen Syuyumbike. According to it, Tsar Ivan the Terrible was forcing Syuyumbike to marry him when he conquered Kazan. She understood that Ivan the Terrible will destroy the entire Tatar people in anger in case of refusal, but it was essential for her not to marry him. So she asked the conqueror to build a tower with seven tiers in seven days. However, when her condition was satisfied, she climbed to the seventh floor of the tower and jumped off, which caused her death. That is why the tower was named after her.

According to another legend, the reason for the construction of the tower Syuyumbike was more prosaic. Syuyumbike ordered to build a tower in honor of her second husband, Safa Giray, when he died.

There is also an interesting legend concerning a gilded ball on the top of the tower that was there originally. According to that legend, there were chronicles of the Khanate of Kazan kept in there, written by the Khans themselves. However, while studying the ball, nothing was found, but some say that there were holes in that ball, which might mean that documents had been stolen. 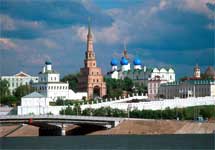 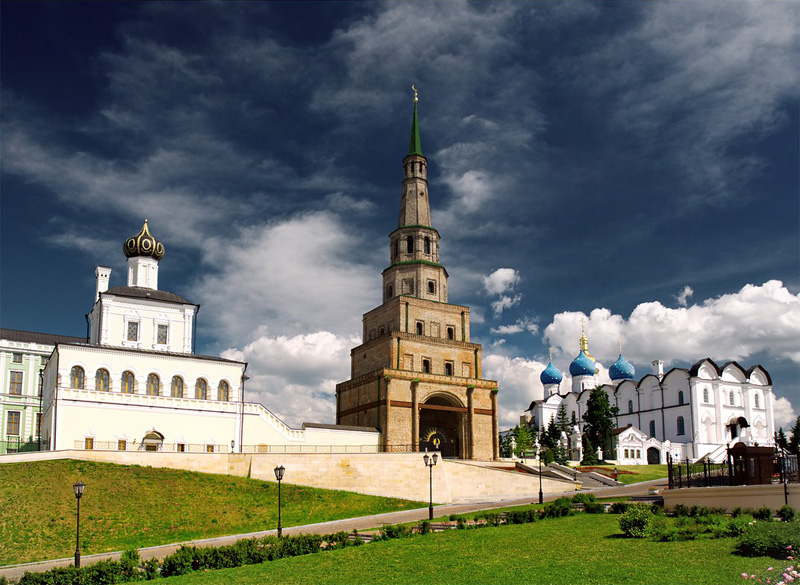 The Italian company BULGARI, founded in 1884, actively uses the octagon's geometric shape to...

Make the New Year's holiday beautiful and unusual, so that the children saw in him a fairy tale,...

With the same pattern repeating on each polyhedrons face, it is possible to create an alternating...