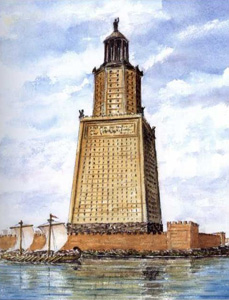 The Lighthouse of Alexandria, one of the Seven Wonders, was built in the 3d century BC in an ancient city Alexandria in Egypt to keep the boats away from the reef on their way to Alexandria bay. At that time, Posidippus wrote the following words about a new lighthouse:

“…this tower, in a straight and upright line, appears to cleave the sky from countless stadia away, during the day, but throughout the night quickly a sailor on the waves will see a great fire blazing from its summit. And he may even run to the Bull’s horn, and not miss Zeus the Saviour, O Proteus; whosoever sails this way”. (McKenzie, 2007) [1]

The lighthouse history is associated with Alexandria's foundation, which appeared in 332 BC thanks to the famous conqueror from Macedonia, Alexander the Great. The great commander established at least 17 cities with similar names in different parts of his vast empire. Almost all of them disappeared, but Alexandria in Egypt thrived for centuries and continues to thrive nowadays.

Alexander the Great was choosing a place for the future city very carefully. Rather than found it in the delta of Nile, he picked out the area 20 miles to the south so that the river's waters would not clog the city harbor with sand and silt. In the south, it had borders with a swamped lake Mareotis. Alexandria had two excellent harbors. One of them received ships, traveling along the river Nile, and the second one was assigned for trading ships arriving from the Mediterranean Sea.

Shortly after, in 323 BC, Alexander died, and the city was taken over by the new ruler of Egypt, Ptolemy I Soter. During his reign, Alexandria became a rich and prosperous seaport city, which lacked only its own symbol and a noticeable coastal landmark, which would show the way to merchant ships to the city's harbor. Then in 290 BC, Ptolemy I Soter ordered to build a lighthouse on a small island of Pharos as quickly as possible.

Pharos was located near the coast of Alexandria. It was connected to the mainland by a huge artificial dam, which was also a part of the city's harbor. Monotonous views of the landscape characterize Egypt's coast; plains and lowlands dominate it, and sailors always needed additional landmarks for a successful voyage: the signal light at the harbor Alexandria's entrance. Thus, the function of the structure at Pharos was determined from the very beginning. As a system of mirrors reflecting sunlight and flashing lights on top, the lighthouse is dated from about the 1st century BC, which brings us to the times of Roman rule. However, the building of the Lighthouse of Alexandria, which served as a landmark to sailors, was built in IV century BC

Construction of the lighthouse.

The lighthouse was designed by the architect Sostratus from Knidos. Being proud of his own creation, he wanted to leave his name on the construction base. However, Ptolemy II, who inherited the throne after his father, Ptolemy Soter, forbade him to do that.

Pharaoh wanted only his name to be mentioned on the rocks to be considered the only creator of the Lighthouse of Alexandria. Sostratus, being an intelligent man, did not argue, but found a way to circumvent that order.

First, he made the following inscription on the stonewall: "Sostratus son of Deksifona, from Knidos, dedicated to the Gods – the saviors, for the health of sailors", then covered it with a layer of plaster, and on top of it, he wrote the name of Ptolemy. After centuries, this plaster layer cracked and crumbled, revealing the name of the true designer of the Lighthouse. As a result, the Lighthouse of Alexandria had become the first lighthouse in the world and the tallest building in the ancient world, besides the Great Pyramids of Giza. Soon the news about that Wonder shattered all over the world and became known as a Lighthouse on the island of Pharos or sometimes referred to as Pharos. The word "Pharos", as a symbol of the lighthouse, started to be used in many languages (Spanish, Romanian, French). 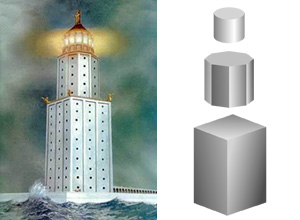 Pharos lighthouse consisted of three marble towers built based on massive stone blocks. The lighthouse's total height is 120-140 meters; its light was possible to see from a distance of 60 km (according to other evidence, up to 100 km). The lower part of the lighthouse was a four-sided prism of 60 meters high with a square base, the side length of which was about 30 m. There were different implements stored indoors, and a flat roof, decorated with huge statues of Triton at the corners, served as a basis for the middle part. It was a 40-foot octagonal prism tower, covered with white marble.

The upper (third) part of the lighthouse was built in the shape of a cylindrical colonnade, 8 columns carried the dome, topped by the 8-meter bronze statue of Poseidon, lord of the seas (or the Statue of Zeus the Saviour).

A large amount of fuel was needed to maintain the flame. Wood was brought in the spiral ramp on carts, which were pulled by mules. There were bronze plates behind the flame which directed light into the sea. The Lighthouse became the symbol of Alexandria. Its silhouette was reproduced on coins, depicted on the vessels, cast and carved in souvenir statuettes for Greek and Roman travelers. 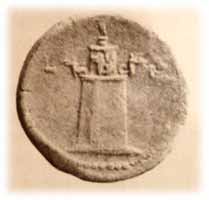 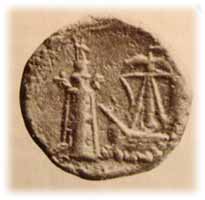 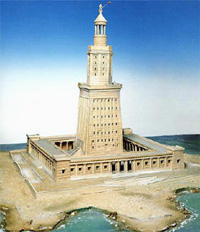 The light of the Lighthouse helped the sailors up to the IV century BC. It survived the fall of the dynasty of the Ptolemy and Alexandria’s occupation by the Roman legions. In the days of Claudius Nero, the Lighthouse, which suffered from earthquakes and weathered stone, was restored. However, on July 21, 365, the antique giant was destroyed by the strongest earthquake in Egypt's history. A part of the city went suddenly under the water, and 50,000 inhabitants of Alexandria died. But even in a heavily devastating condition, the lighthouse's height was about 30 meters, is a good guide on Alexandria's flat coast.

The lighthouse stayed in that condition until XIV century. However, after the next earthquake, it was pulled apart stone by stone, and its basement was built into the medieval fortress. According to other sources, the basement went under the water together with another land near the coast, and today it is located on the bottom of Alexandria bay.

In the Middle Ages, the Lighthouse's podium remains were built in the Turkish fortress called Kite Bay. Now it has been transformed into the Egyptian military fort. That is why even scientists and archaeologists are unable to get the remains of the Lighthouse 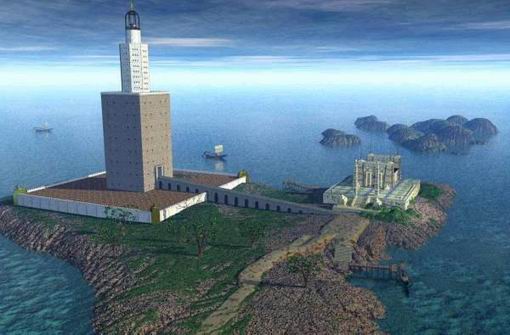