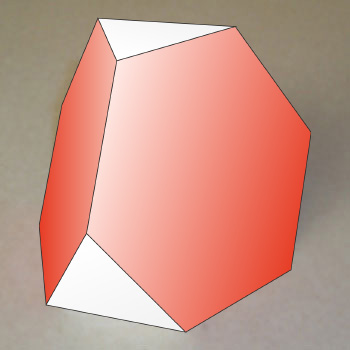 This polyhedron is obtained by successively cutting off each of the vertices of the tetrahedron.

A truncated tetrahedron is a semiregular convex polyhedron with two properties:
1. All faces are regular polygons of two types, a hexagon, and a triangle;
2. For any pair of vertices, there is a symmetry of the polyhedron (that is, a motion that translates the polyhedron into itself) that transforms one vertex to another. 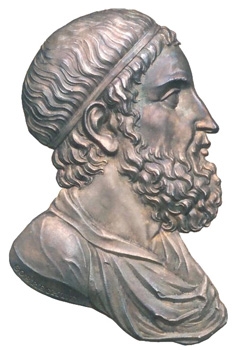 The truncated tetrahedron is one of the 13 solids of Archimedes.

Archimedean solids are semiregular polyhedra in the sense that their faces are regular non-similar polygons. Simultaneously, the condition of one of the types of spatial symmetry (tetrahedral, octahedral, or icosahedral) is preserved.

Mathematical Characteristics of the Truncated Tetrahedron

Mathematical Characteristics of the Truncated Tetrahedron 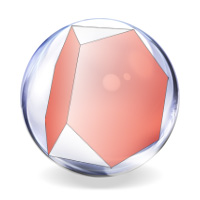 A truncated tetrahedron can be placed in a sphere (inscribed) so that each of its vertices touches the sphere's inner wall.

The radius of the described sphere of the Truncated tetrahedron

Where a is the length of the side. 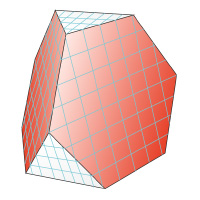 The surface area of ​​the Truncated tetrahedron.

The following formula can determine the surface area: 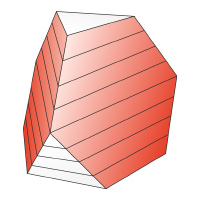 The following formula determines the volume of the Truncated tetrahedron:

Accordingly, it is possible to carry out the opposite operation - in the presence of four octahedra and six tetrahedrons, assemble a truncated tetrahedron model from parts.

The figure shows the shape net of a truncated tetrahedron: 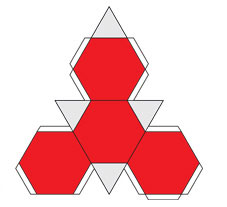 If you intend to use colored paper, use this net.

Also, there are other options for coloring the polyhedron, when each of the neighboring faces is painted in its own color. Or a certain number of coloring colors is used, and the same colors do not border each other.

We present to your attention two options for coloring the truncated tetrahedron. 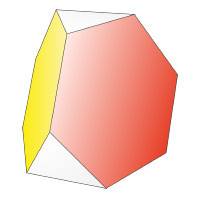 The second option is a four-color painting. Opposite faces have the same color: 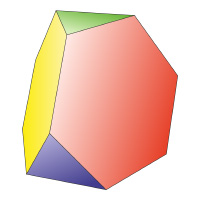 Video. The process of converting a tetrahedron to a truncated tetrahedron

Video. The process of converting a tetrahedron to a truncated tetrahedron

Truncating all four vertices of the tetrahedron leads to the formation of a truncated tetrahedron. The triangular faces of the original polyhedron lose their area and are converted to hexagonal faces.

Video. Build a polyhedron from a net

Video. Build a polyhedron from a net

This video from our partners, the ART KOSEKOMA team, clearly demonstrates how the pattern is converted into a geometric shape: 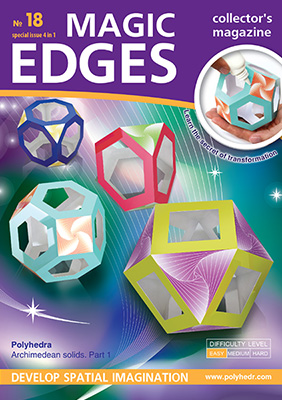 To assemble polyhedra, we can offer you ready-made patterns that are cut and folded.
To do this, you need to use the details of the set Magic Edges 18.
Also, in the release itself, you will find information about the structure of the polyhedron.
Polyhedra, from the set Magic Edges 18:
Assembling a truncated tetrahedron from the set "Magic Edges"
The rotation of the finished polyhedron assembled from these parts:
Detailed assembly from Alexei Zhigulev (youtube channel - Origami)