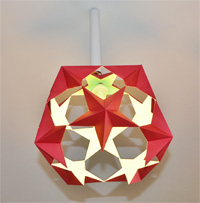 A suspended ceiling lamp, or simply a chandelier, has never been so close to exact mathematical forms.

The idea of ​​creating a chandelier arose after the assembly of the polyhedron - "16th stellation of icosododecahedron."
Since the polyhedron itself has many open surfaces, it could perfectly cope with the task of transmitting light.
The only significant change in the design was made by removing one of the 12 five-pointed stars.
As a result, 11 interconnected stars and a light bulb inside made it possible to create a new interior item with a “mathematical bias”. 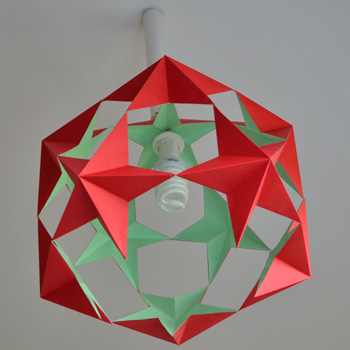 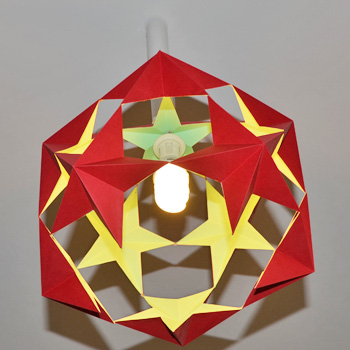 Small focus! The photo camera transfers the same polyhedron in different colors, depending on whether the bulb is on or not.
Both photos were taken at intervals of a few seconds.
The dimensions of the resulting "polyhedron" were:
330 mm (height) x 300 mm (length) x 300 width

To create, you will need 11 blanks (stars) having external and internal parts. 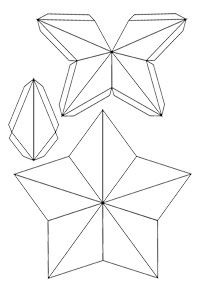 A star shape net can be downloaded and printed on an A4 sheet.
The most difficult and painstaking task is to glue together the "five-pointed stars". The connection point is only the tips of the beams. Therefore, the final process will have to be stretched for several days to alternately glue all 15 “assembly points” onto a flat surface. 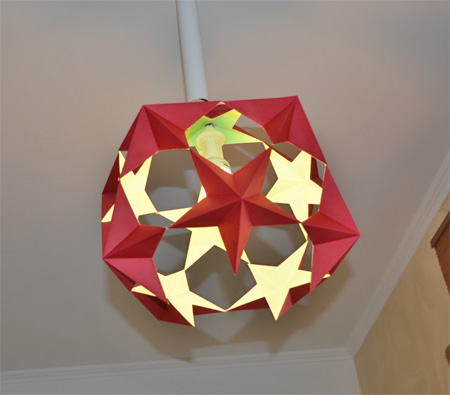