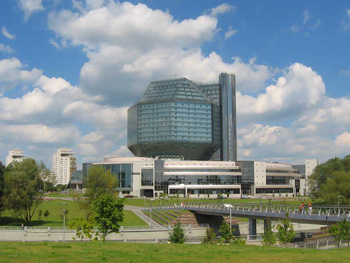 The “business card” of the Republic of Belarus is a new building of the National Library in Minsk. The new building project was designed in the late 80s of the last century, and in 1989 it won the competition among Soviet Union countries. However, it became possible to implement it only 15 years later.

The new building of the National Library in Belarus was opened on the 16th of June, 2006. The president of Belarus, Alexander Lukashenko, took part in the opening ceremony and got the first library card. 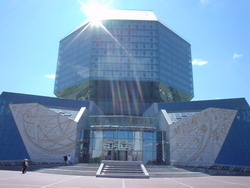 The building itself has the shape of the polyhedron, rhombicuboctahedron, height is 73.6 meters (23 floors), and weight is 115 000 tons (excluding the books); people compare it with the shape of a diamond.

The creative design of the building makes the image of the National Library unique. The main entrance is built-in pages in an opened book where different images related to World and Slavic Literature are depicted. A monument to the first book printer in Belarus, Francysk Skaryna, can be found in front of the facade. 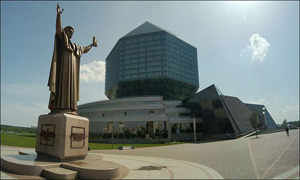 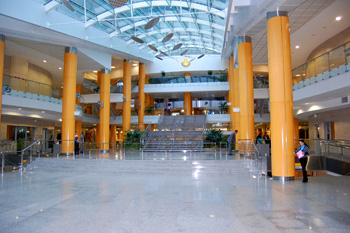 The Library is one of the largest in the world, not only due to its size but also due to the number of books it has.

There are 20 reading rooms and book depositories located on 23 floors maintained by 1500 computers. There are 14 million copies of books that belong to the Library. There also can be found some scarce editions (around 70 thousand), old printed books, manuscripts dated from the XIV and XV centuries. Periodicals amount around 3 million magazines, newspapers published throughout the last century. The Library stock has around 1.5 million foreign publications and more than 122 thousand documents in a soft copy. More than 3 000 readers may make use of the Library every day.

One can find a restaurant and a snack bar in the building, Internet services, an international pressroom, an Oval room, and a conference room for 450 guests. In this room, some delegation meetings on the highest level were held, including the heads of countries-members of the EurAsEC.

Much attention is paid to the library excursion activities. Sightseeing tours became very popular; they introduce visitors to the Library's new building and explain how the library works and show its architectural features, design, and technical level. 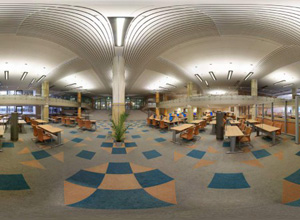 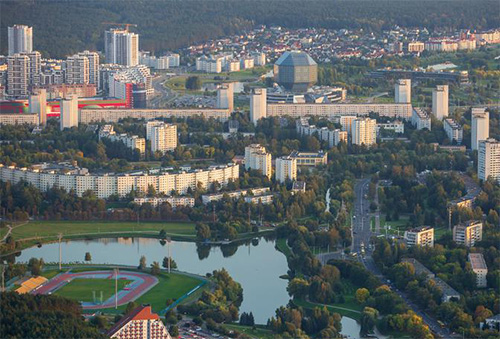 On the library roof, one can find a viewing platform at the height of 72 meters.A panoramic elevator takes guests to the top, where they can admire the beautiful views of Minsk. The National Library is going to open a Museum of Book. Its visitors will have an opportunity to see a large collection of rare books, such as the publications of Francysk Skaryna, manuscripts on palm leaves, and parchment scrolls. Priceless tomes are located in a special showcase, which maintains optimum temperature and humidity. To ensure the preservation of old books with acid-based paper, lamps with diffused light are used.

In addition to old books, visitors can look at more modern ones, which are also of great value. The reason is that they were signed by famous writers, poets, and artists, among which are Maxim Bogdanovich, Marc Chagall, Ivan Shamyakin, as well as the signatures of Gogol, Tsvetaeva, Hugo, and many others. 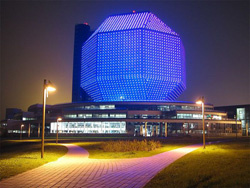 The building's illumination is unusual; it is a giant multicolor screen (with an area of 1985 m², media facades, based on LED clusters), which turns on with a sunset and runs until 0:00. Its colorful patterns are constantly changing. Such a show never ceases to impress millions of tourists. The Library has become the main attraction of the capital and undoubtedly the most visited place in the city.

The National Library of Belarus is in the top 50 of the most "unusual buildings in the world." According to the website «Village of Joy», which assesses the most amazing, interesting, weird, and strange things globally, among the most daring architectural projects, one can find the National Stadium in Beijing, Casino in Las Vegas, and the highest tower in Barcelona. These amazing buildings were left behind the National Library of Belarus, which placed 24th on the list.

This article will tell whether the “Magic Edges” can be attributed to a variety of origami. As the same...

The living world inside a polyhedron

With spring's arrival, all the plants around come to life, foliage appears, everything turns...